You would think that by now, developers would know what people are looking for in an Apple Watch app. They want interactivity, usefulness, and entertainment. When Bustle announced it was releasing a companion to its app for the Apple Watch, I thought for certain it would at least be entertaining, if not informative. In a case of the truth being stranger than fiction, I was sorely disappointed. Bustle’s update brings a wholly, entirely bad Apple Watch app to your wrist, if you let it.

A Customized News Feed Just for You

The iPhone app features more than a hundred topics to choose from when you’re creating your news feed. The topics include things like sex and relationships, breaking news, politics, technology the Kardashians, Beyoncé, and just about everything in between. From your iPhone, just set up your favorites and Bustle will create your own personalized news feed.

You would think, then, that looking at Bustle on your Apple Watch would let you browse your news feed and read articles that interest you. After all, when you see an interesting headline or image, you want to get more information. Does Bustle’s Apple Watch app let you do that? Nope, no way. Like I said, this is an example of a really bad Apple Watch app.

Instead, all you can do with this Apple Watch app is read the headlines and look at the pretty (or not-so-pretty) pictures. I thought for certain I was wrong about that, so I tried long-pressing, 3D Touch force-touching, and even tapping frantically on the headlines and pictures. Nothing. 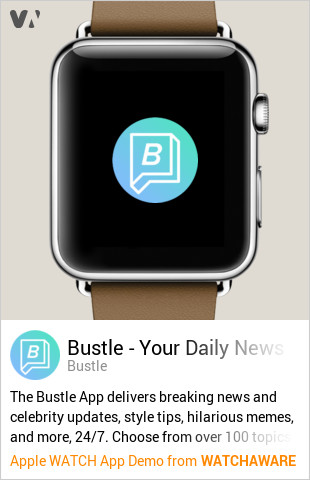 This might not be the worst Apple Watch app I’ve ever come across, but it certainly comes close. If I’m looking through images or headlines and find something interesting, I don’t want to have to pull out another device to read more. After all, then I have to find that headline or image all over again.
Come on, Bustle. If you aren’t going to let us read the headlines on our Apple Watch devices, at least have tapping the headline or image prompt us to open up our iPhones and then get your app to show us that whole article. There’s little point in creating a bad Apple Watch app, one that doesn’t really do anything.

If you want to see what I’m talking about, check out the latest version on the App Store. At least it’s free.