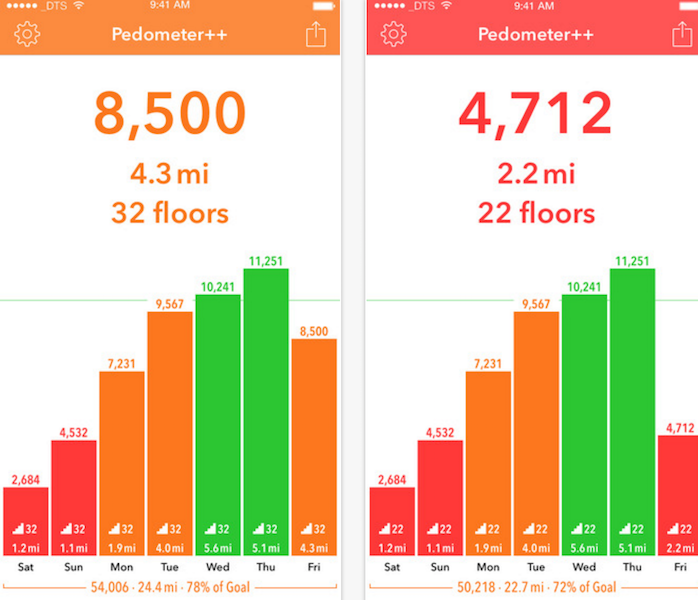 David Smith, creator of the popular step-tracking app Pedometer++, has updated his app to include deep integration with the Apple Watch. The new update, which is now available, lets you see your steps in a more complete way.

Version 2.3 is entirely focused around building a rich and robust integration between the Apple Watch and iPhone. Letting you track your steps and reach your step goal in a much more complete way. The update focuses around 3 main features: data sync, complications and a workout mode.

According to Smith, the app uses both the Apple Watch and your iPhone to constantly measure your movement depending on your activity. The example Smith users is when pushing a stroller.

If, for example, you are pushing a stroller the iPhone in your pocket will do a much better job than the watch on your wrist. Conversely if your iPhone is in your purse, the watch on your wrist is much more accurate. The challenge this update solved is how to merge these two data sources in a way that provides a consistent and reliable picture of your day.

It’s a good example of how your iPhone can do a better job at measuring than the Apple Watch. What’s amazing is that the datas isn’t segregated, but rather they are merged to provide a simple, compressive look at your daily movement.

After extensive testing about how that works I determined that it doesn’t really do a good job for step data. The Apple Health algorithm works around the concept of a ‘priority’ device. This priority device’s steps are then used in all instances except where that device is completely unavailable. In which case the secondary devices data is used to fill in the gaps.

Smith is right. Getting quick step data is actually subpar on the Apple Watch, something I’m actually surprised by. One of the biggest selling points of devices like Fitbit is getting super quick glance of how much you’ve walked during the day. The only way to get that on the Apple Watch is by diving deep into the Health app. Not ideal.

Pedometer++ also offers simple Complications that allow you to see how many steps you’ve taken throughout the day as well as see how far you are from your step goal. The app is simple, clean and offers functions that, to be honest with you, I expect to come from Apple. Perhaps watchOS 3 will address this, but until then, if you’re looking for a great way to track your steps, Pedometer++ is the way to go.